Las Vegas is one of the United States of America’s most famous cities, having become the casino capital of the world in the 20th century. Although by pure numbers, China’s Macau has become the global leader in wagering, Vegas remains the third-most-visited city in the USA.

It’s achieved this by diversifying its offering and catering to every type of traveller, from those who want to have a flutter in the casinos to business people attending major conferences. Even people who can’t bear to be separated from their four-legged friends are welcome as many of the city’s venues are dog friendly.

So if you’re planning a visit to Las Vegas, here are some of the things you should put on your itinerary. 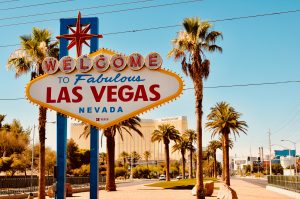 Visit One of the Casinos

As the city is famous for them, most visitors go to at least one casino during their stay. If you’re staying in one of the larger hotels, then there will almost certainly be one on the premises already, though you could also choose one of the many other famous venues on the Strip.

If you’re a fan of card games like poker, then you may want to pay a visit to some of the top card rooms in the city, including the Venetian, Bellagio, and Caesars Palace. Alternatively, there’s Bally’s, which plays host to the World Series of Poker each year, or the Horseshoe and Golden Nugget which both played a key part in making the game so popular.

Card games aren’t the only way to get your thrills in Las Vegas. The city also has an impressive selection of roller coasters and thrill rides, most of which are dotted around the place at different casinos.

One of the most famous is the Big Apple Coaster at New York-New York which, as its name suggests, is a Manhattan-themed ride that uses trains that have been painted to resemble the city’s famous yellow taxis. Riders reach speeds of 67 mph and are subjected to two inversions and a first drop of 144 ft. 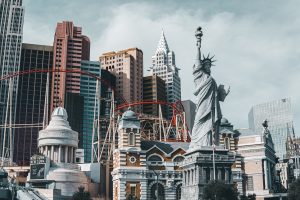 Other roller coasters in Las Vegas include the Adventure Canyon log ride and Desperado hyper coaster at Primm Valley, and the Canyon Blaster and El Loco, which can be found at the Circus Circus Adventuredome. For some more unique thrill rides, you’ll want to head to The Strat, which has the X-Scream, Insanity, and Big Shot located on the roof of its tower.

Vegas is also where you’ll find many of the biggest names in show business. In recent years, legends like Rod Stewart, Celine Dion, Usher, and Lady Gaga have all performed in residency. The list of performers is continually evolving, so be sure to check who has dates scheduled and plan your trip to coincide with the one(s) you want to see.

Many of the largest casino resorts have huge concert halls for these performances, such as The Theatre at Resorts World, the Colosseum at Caesars Palace, and the Venetian Theatre.

The live entertainment isn’t limited to just the arts either. Las Vegas is the combat sport capital of the world, hosting many big boxing bouts and MMA matches, including many UFC events.

If you prefer your sporting events to be a little more high octane, then Las Vegas Motor Speedway is located just north of the city and is where you’ll find NASCAR Cup Series events taking place.

Fill Up on Fine Food

After a long day of Vegas thrills, you’ll need to refuel. Thankfully, Las Vegas also has just about every cuisine you could think of and at every possible price point. The city is famous for its lavish all-you-can-eat buffets but it’s also where you’ll find fancy upscale restaurants, cheap and cheerful cafes, and everything in between.

Depending on where you stay and how long for, you could easily dine only in your hotel and still eat in a different restaurant every day. But there are most likely better and more diverse choices available, so make sure you explore what’s around.